After long months with Stax "Pluto 2A3/SE" amplifier, I was looking to use it as a driver amplifier for "something bigger". This booster amplifier is quite ambitious project, with lethal voltages around 1300V.

Wikipedia: "A pulsar is a highly magnetized, rotating neutron star or white dwarf, that emits a beam of electromagnetic radiation."
Simulated peak voltages on anode at full power are huge. Up to 2500V. Think twice about safety & insulation.

Few design points:
*Schade FB on radial beam transmitter tetrodes 4-125A  (MOSFET A2 drive),
*using Stax headphone amp transformer secondary, as driver with mentioned Schade drive,
*toroidal output transformers,
*mercury DCG4/1000 (or maybe xenon 3B28) rectifiers, (Hg tubes can backfire when overloaded..)
*choke input DC filter (is a must for these tubes),
*foil HV capacitors only
*industrial switching 5V 30A supplies for endstages,
*Hammond 1500VCT 724A HV trafo, with hybrid bridge (because 3000VCT  735A is very expensive)
*size and weight of final product, probably will be a pain in the ass..
Coming soon, hopefully. 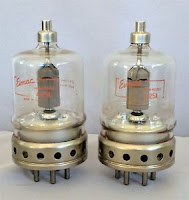 
First tests are done, connected to signal generator, sinewave looks nice on scope. Unfortunately these  SiC MOSFETs can be easily damaged by ESD, then will pull big gate current! I took new transistors from ESD bag, shorted G+S with aligator clips; and soldered 9V Zeners directly to transistor pins (near the body). Now they can be handled safely. Do this soldering at ESD area, if possible. Unfortunately I killed 3 transistors with static discharge, about 20€ loss.... Here is the "AmberBridge", in this raw shape it does 350Hz..250kHz (-3dB). Yes, no bass here (now), tested it with signal generator through µ47 cap. It´s the one of reasons for having no bass.
With next update, I will go with line transformer, because winding is floating source of signal, and feedback network can be wired better. Lundahl LL1545A (mu-metal) costs about 80€/pc. Transformer benefits: 1) exact phase (and same amplitude) splitting for each stator; 2) high voltage isolation (1500V) to input.
As you can see, this has minimum components and is simple to build. Compared to original Stax amplifiers, it will be very cheap. Next version with driver transformers will increase price a bit, quality will be improved too (with different feedback network).

One critical spot here - feedback network and correct frequency compensation. This is the main reason, why I selected lowest capacitance MOSFET. 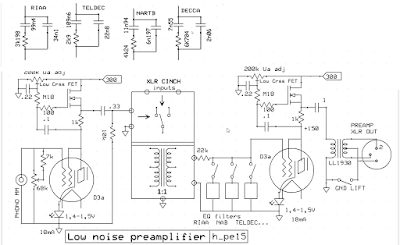 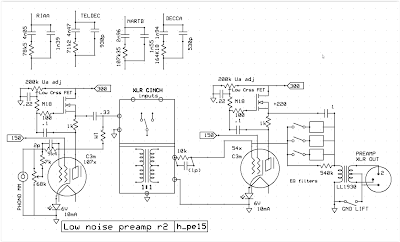 Since I am very satisfied with 12AX7 gain stage supported by MOSFET, I was curious how to reuse this design elsewhere.

Here it is, a push-pull amplifier with some non standard feedback mechanism. I am tired of millions schematics with low quality feedbacks, like UltraLinear or even global feedback (where signal from output of amplifier comes back again to the front..)  Those mechanisms are old (outdated). Signal which was at the output of the amplifier, and comes again to his input, has often some phase shifts.
This can start awful oscillation, distortion profile is not always improved by these old fashioned feedbacks.
If you carefully use semiconductors in tube amp, end result can be much better. MOSFET does two things here; gives very high impedance to input tube, and low drive impedance (both not possible with anode resistors!) Gains like these are impossible with anode resistors, and will not work here! (..and cathode unbypassed ECC803 sounds lovely too) It´s possible to have >85 gain for ECC803 (with MOSFET), and >95 on 12AX7WB.

Because gain is so high, we can expect the impedance provided by MOSFET to preamp tubes is really huge = ultra low distortion!

Two stage PP amplifier with this feedback system is possible. Datasheets for 6L6GC PP mentions "70V Peak AF grid-to-grid voltage" for full output.
Even if you used small gain input tubes, just wire input transformes in 1:2. I recommend tweak the fb ratio, 10-40% must be enough in all cases. Due to high sensitivity of tetrodes, 20% or less can be enough.  The grid choke is optional, improves DC bias stability, and does change the sound too. Since choke impedance rises with frequency; it will make feedback stronger at treble frequencies. In bass range, its impedance is small, pulling Schade feedback ratio closer to minimum %. (therefore damping factor will be smaller too).
If my expectations are right, amplifier with choke bias, should have beefier bass and negligible distortion at treble. Treble and mids is where ears are most sensitive to distortion. Smaller DF  will make bass feel strong. (virtually making your woofers like higher Qts..)

Input sensitivity is about 0,8Vrms for max power out. (85x input gain+40%FB)
Sice this is voltage feedback taken directly from primary windings; higher impedance transformer will improve distortion profile. (then you can use less feedback ratio %)   EL34 or 12E1 (CV345)  are even better here.
Žiadne komentáre:

Let me show few more examples, how to put this system on even higher sound quality level. 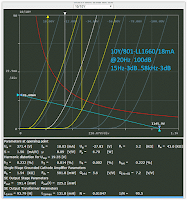 I´ve seen a 801/VT62 on ebay sale. I was curious what changes
are needed to currently used setup.
About 220€ on ebay for a pair, sure it is worth to take a time and recalculate whole amplifier. Currently used heater supplies are not strong enough, update is neccessary.. 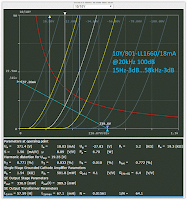 In A1 class, is possible to get 155Vrms STAX output, enough for medium volume listening + some music peaks.   (LL1660 transformers wired as 4:4,5)  For serious loud listening class A2 modification is needed. As you can see, some complications here and there; but this thing is doable ! 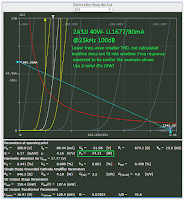 One remark, this version has less volume headroom than 2A3 version. But will sound better for jazz and similar smooth music genres.

Update 17.5.2016 - Working on directly heated triode input driver, to replace the modern 12AX7WB. Historical tubes sounds nicer than noval types, but are not very hum forgiving. It took about week of work to remove hum, it is fixed now. Sounds way richer in bass extension, treble is softer but does not lack details! Lovely music with detailed soundstage, best tweak so far.  (MAZDA HL23DD)


2A3 JJ 40W,  High Current variant - i have been looking at LL1677 transformer datasheet, recalculated it with this big tube made in Slovakia. Distortion profile looks very good compared to 801A  and clean, mostly only a little 2nd harmonic. So you can get cleaner sound than 801A, and with more power.
Another benefit is much bigger headroom, theorethical max output 282Vrms (!). Step up ratio of transformer is responsible for this (1:2)
(801A example is 1:1,125) Triodes have smaller distortion in area of higher current and higher impedance. This example is about that.  .
If you do not care about consumption (similar like 300B speaker amplifier), consider this version. 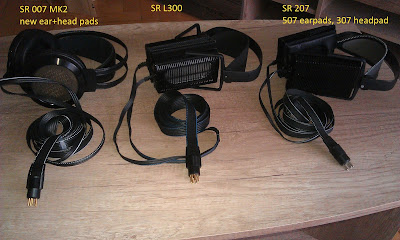 After a many positive STAX reviews I decided to try them out. Wish i got this idea much sooner!

I saw on internet original STAX amplifiers schematics, both transistor and hybrid ones, was not satisfied with them. I wanted to go single ended, with some good "iron" instead


Lundahl Transformers were chosen, because of exceptional quality and endless possibilities of their products. Windings are split into many symmetrical sections, way better than just winding taps.
You can wire them in many ways, to get desired impedance / voltage ratios.
What was used:
Amorph core input transformer LL1544A (10Hz - 70kHz +/- 0.5 dB @ 0,775VRMS):
http://www.lundahl.se/wp-content/uploads/datasheets/1544a.pdf
Interstage standard core transformer LL1660/18mA (better option-amorph core, twice expensive):
http://www.lundahl.se/wp-content/uploads/datasheets/1660.pdf
I spent about two weeks, calculating various working points of 2A3 output stage. Everything had to be considered, from Stax headphone capacitive load behavior, optimal tube distortion profile, and comparing each transformer parameters (parasitic and primary inductance, optimal transformer airgap).
Wanted to have this amplifier much versatile as possible, with minimum compromises. Reason why 2A3 tube, and why not 300B is simple - better distortion profile at low currents!


Days later I decided to go with LL1660 / 18mA; this model is made with higher impedances/voltages on mind. It suits better Stax usage. Wired "backward" 2,25:4 voltage ratio, measured primary inductance is ~33H, parasitic inductance ~20mH (very good for such hi-impedance transformer). Parasitic capacitance ~120pF.
This is good for range 15Hz....50kHz (-3dB) !
As you can see, no global feedbacks used. Distortion is low, compared to typical speaker
amplifiers.  This shows how good quality the components are. 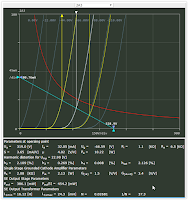 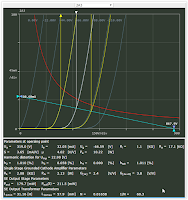 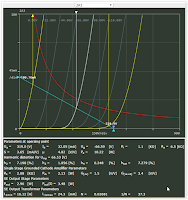 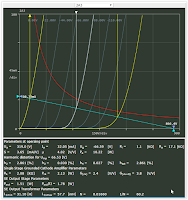 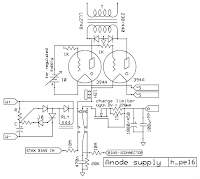 During autumn 2015, Lundahl announced new interstage transformers. Those are mostly for 1:1 usage, and could be nice with righ rp directly heated triodes, like 10Y, 801A and others. I can only imagine delicate sound coming from such setup with thoriated DHT´s, matched to silver wires-amorph core transformers!

STAX headphone features
Electrostatic transducers are ultra low distortion, superior even against most expensive speakers known. Very thin diaphragm moves between two stators by electrostatic force.
No magnets here - like on typical dynamic transducers, or heavy voice coils glued to thick membranes (movement inertia, and resonances).  Micron thick diaphragm does not have own resonance point, even if it had some, surrounding air would dampen it. Diaphragm mass is small, compared to surrounding air.
Therefore STAX has no problem reproducing smallest music details, stereo space is very wide. Turning volume to max, will not change sound character or introduce resonances / distortion or boomy sound.
Standard headphones/speakers will sound harsh if played too loud; this is not happening with Stax..  It gives you desire to increase volume, very easy to loose self control (and damage ears).

My biggest surprise was listen to mp3, it was not bad as i thought it will be. Good quality mp3 has some hidden potential, and Stax was able to recover it. However, lossless formats or HD quality tracks are different monsters, amount of detail is huge. I am rediscovering music albums again, which i was very familiar for years.

Compared to Beyerdynamic DT990pro, the STAX SR207Lambda sound more lifelike, upper range bass does not sound boomy (subbass is rock hard).
STAX Lambda plays "outside of your head"; amount of detail retrieved from music is huge. You can feel the recording room size, also fading reverberation-for example each hit of the drum.
Midrange on Beyers sounds attenuated, acoustic guitar lacks fullness of sound. Treble is quieter too, like under blanket, top end treble range sounds a bit louder (harsh?) --it´s not sounding "all equal" like STAX does. Beyer´s midrange dip is noticeable, also the stereo size is small- music plays "in head".
Comparison to STAX SR007mk2. If entry level STAX Lambda sounds so good, what to expect from ex-flagship? Wear comfort is very good, even if listening to it whole day. (headphones feels lighter than cable, which is very wide)
Soundwise, it is unbelievably good. Price difference is big, but it is worth it. Enjoyable sound without peaks or dips, feels even flatter than SR207. Probably bigger circular diaphragms responsible for sound improvements. Bass is great, no resonances, just deep growl. Very different than standard headphones.

Sound source is a USB DAC, XmosU8 + PCM5102A DAC. It is a assembled unit from ebay. With unlocked drivers capable of 32b/384kHz rates. 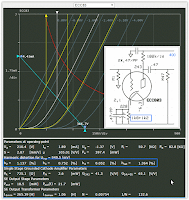 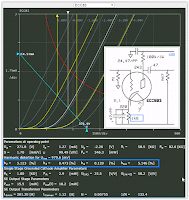 (I think, for treble roll off is responsible Miller capacitance of end tube, which is ~90pF . This represents additional load of 130k, which lowers gain at treble freq.) 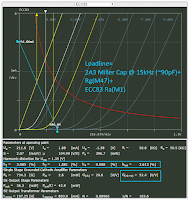 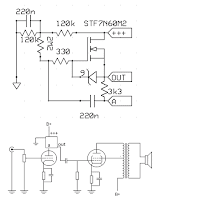 Gyrator third revision, another step up in sound quality: 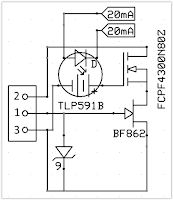